Cyberattacks are becoming more dangerous these days, and it’s not just large enterprises that are falling victim to them. In fact, 43% of cyberattacks are now targeting small businesses. This is because cybercriminals are taking advantage of small companies that don’t have the resources for extensive security solutions.

One of the threats that small organizations have to be wary of is malicious software, also known as malware. These programs are intended to damage computer systems and/or disclose sensitive information. If malware attacks are not prevented, these can be significantly costly for businesses and even damage their reputation among their customers.

Let’s take a look at the top types of malware your business has to look out for:

Malware is typically included inside email attachments. These are often documents that can harm your computer when opened. And one of the ways cybercriminals do this is by exploiting macros or instructions that expand into another set of instructions to perform a particular task.

According to IBM’s X-Force Incident Response and Intelligence Services (IRIS), 22% of campaigns reported in April 2019 delivered malware via booby-trapped macros. This scheme used legitimate documents that cybercriminals injected with malicious macros. Once the user opens the file, they will be asked to enable macros so the document can be displayed properly. However, doing so launches the malware.

To protect your IT infrastructure from macro malware, encourage employees to download and open attachments only from emails they trust. Also, check for typosquatting attempts that involve misspelled words such as “goggle[.]com” instead of “google[.]com”, or “pay-pal[.]com, instead of paypal[.]com. These are deliberate attempts by cybercriminals to trick users into believing they are going to a legitimate website, but end up going to sites that are infested with malware instead.

Ransomware is one of the most difficult malware variants to combat. Not only does it disrupt your company’s productivity by locking drives and files away from users, but it also threatens to throw away the key or destroy your data unless you pay a significant amount of money.

In 2017, the WannaCry ransomware infected more than 200,000 computers across 150 countries and forced many businesses to halt their operations. Since then, ransomware attacks have become more dangerous. According to a report by Bitdefender, ransomware is the fastest-growing malware today in terms of the number of reported incidents and known variants.

Ransomware can be costly for businesses not just because of the ransom they demand, but also the average overall cost per attack (i.e., the average total cost incurred by suffering downtime, executing an emergency response, and losing opportunities along the way). In 2017, the average cost was around $133,000.

To mitigate the risk of being victimized by a ransomware attack, avoid dubious-looking attachments. Do not open emails from unknown sources as well. Install all necessary security patches on your system and make sure that your antivirus and anti-malware software are up to date.

In case of a ransomware infection, we highly recommend not paying the ransom. Doing so will only encourage the cybercriminals to continue their business, and in no way will payment guarantee that you will get your files back. It’s best to restore from an external backup, such as ones from flash drives, external hard drives, magnetic tapes, or cloud backups provided by managed IT services providers like Binatech.

One of the trickiest types of malware you can come across online is scareware. This is software that tricks users into visiting malware-infested websites or download rogue programs. 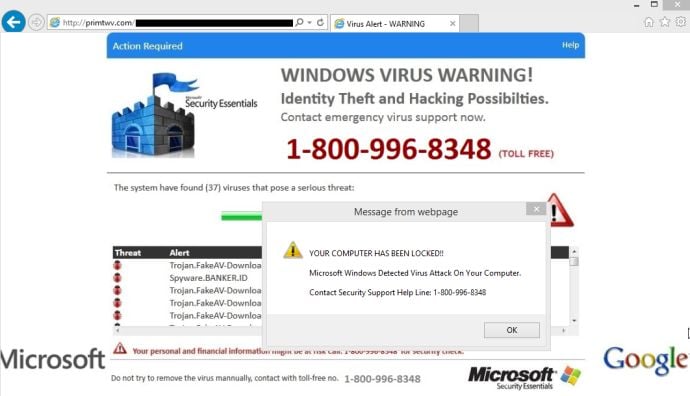 Scareware pretend to be legitimate programs on your computer to induce a sense of urgency and make the user take action. [via MalwareTips]

Typically contracted from unsafe websites, scareware pretends to be a legitimate warning from your system, telling you that your computer is infected with viruses, and you have to pay for a certain program to clean it. However, the program is actually malware intended to display even more pop-up ads, install unnecessary programs, and steal your sensitive data. Modern scareware cannot be easily dismissed, as some variants will reappear even after being closed.

To avoid scareware, teach your employees not to visit websites that might be hosting malicious content. As an alternative, you can also use web filtering tools to block all the websites that aren’t essential to your business. Avoid opening unsolicited email attachments as well.

Malvertising refers to harmful code injected into legitimate advertisements. Once an ad is clicked, users may be taken to a malicious website or end up downloading a rogue program that will install malware on their computer. Hackers might even steal sensitive data through this method.

Newer types of malvertising don’t even require the user to click on an ad. By the use of drive-by downloads, users can become a victim just by visiting an infected webpage.

As the name suggests, spyware is often used to spy on the victim’s computer activities or log their keystrokes. This enables hackers to steal sensitive information such as login credentials and company files. While most types of spyware are easy to remove, they are an indication of vulnerabilities within a system that can be exploited for other nefarious attacks.

Similar to the aforementioned types of malware, spyware can easily be prevented by teaching your workforce to not open emails from unknown senders. Immediately close pop-up ads, and do not download files from untrustworthy websites.

Malware may be growing more dangerous by the minute, but small businesses can do many things to protect themselves. Remember that prevention will always be better than cure, as this will not only protect an organization’s data and reputation, it will also save them money.

Protecting your business from malware should be simple. With Binatech, your IT infrastructure will be protected 24/7/365, no matter the cyberthreat. Don’t let malware get the best of your organization. Call us today and make us your partner for success.